What is the first thing you do each morning? How about the last thing before you go to sleep? If it’s checking notifications on your smartphone, you’re not alone. American consumers now spend an estimated 5 hours a day on mobile devices – nearly twice as much time as five years ago. Much of that time is spent scrolling, liking, posting, and sharing on social media.

More than 80 percent of American adults use social media, and the importance of platforms like Facebook, Twitter, Instagram, and Snapchat in our lives has grown steadily over the past decade. Facebook recently reported having 1.4 billion daily users worldwide — including 184 million in the U.S. and Canada. Many people describe feelings of anxiety and stress when they can’t check their social media accounts.

That got us thinking. Just how important are virtual friends and followers to most Americans? What would you give up to stay connected? In the largest study of its kind, we surveyed more than 2,000 U.S. residents from all 50 states plus the District of Columbia. Read on to discover what we learned about how important our digital lives are compared with our real lives.

A Year Without Social Media? 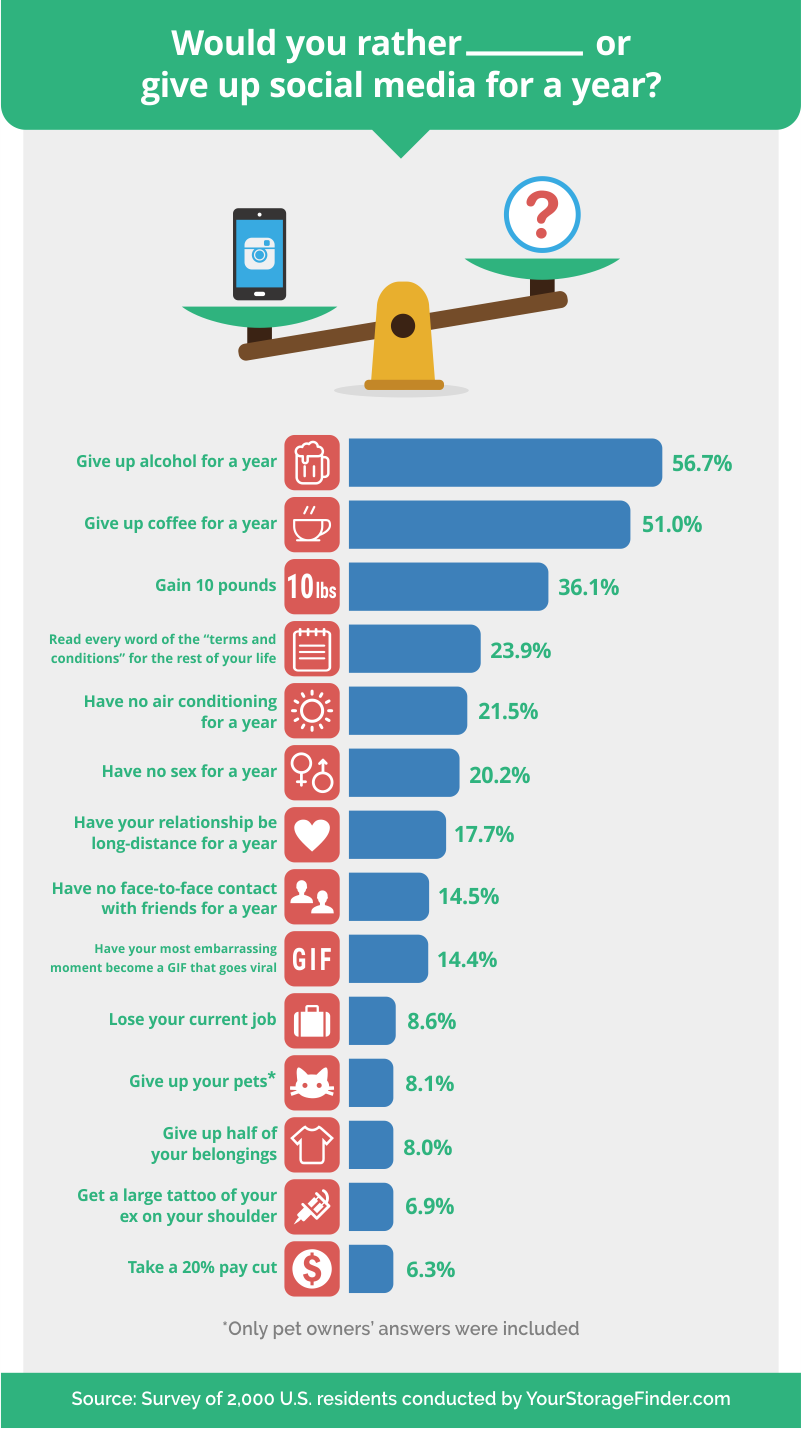 Many Americans have a love-hate relationship with social media – particularly when their feeds get politicized – but that doesn’t mean they’re willing to live without it. A majority of our respondents said they’d sooner give up alcohol (56.7%) and coffee (51%) than their daily Instagram, Twitter, or Facebook fixes. More than a third of Americans (36%) would rather gain 10 pounds than give up social media for a year.

Our respondents drew the line at taking a 20% pay cut or getting a large tattoo of their ex on their shoulder. But 1 in 5 Americans would sooner live without air conditioning (21.5%) or sex (20.2%) than give up social media for a year.

Most people still value face-to-face contact, but 1 in 7 Americans (14.5%) would rather go a year without seeing their friends in person than forego social media for that length of time. And more than 1 in 6 would be willing to have their relationships be long-distance for a year (17.7%) to keep their social accounts active.

The Lure of Constant Connectivity 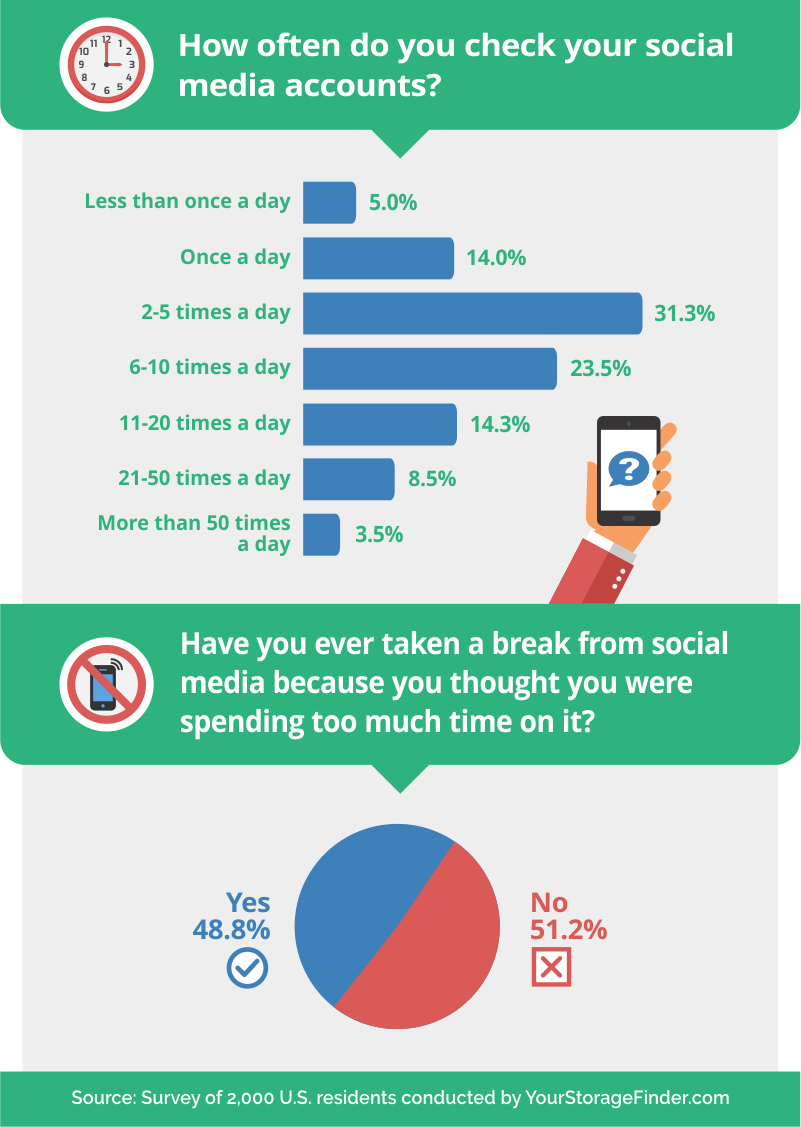 Our survey found that the average American has accounts on 6.2 different social media platforms and admits to checking them an average of 5 times a day. More than a quarter (26.3%) of our respondents said they sneak a peek more than 10 times a day. A very small minority (3.5%) reported checking more than 50 times a day. However, the actual number could be much higher.

A recent university study found that people tend to significantly underestimate how often they look at their smartphones when self-reporting. In the study, tracking software revealed that the college-aged subjects actually looked at their phones an average of 85 times per day – more than double their average estimate of 37 times.

Whether we can accurately pinpoint how much time we spend logged in or not, many of us have had the uncomfortable feeling that we were spending too much time scrolling through photos of friends and celebrities. Active engagement on social media can have some emotional benefits, but extensive use has been linked to higher rates of depression, anxiety, and stress – particularly in teens.

There is no formal medical diagnosis at this point, but Google searches for “social media addiction” yield more than 90 million results and even the Kardashians have touted the benefits of periodic social media “detoxes.” Almost half of our survey respondents (48.8%) said they have deliberately taken a break from social media because they felt they were spending too much time on it. 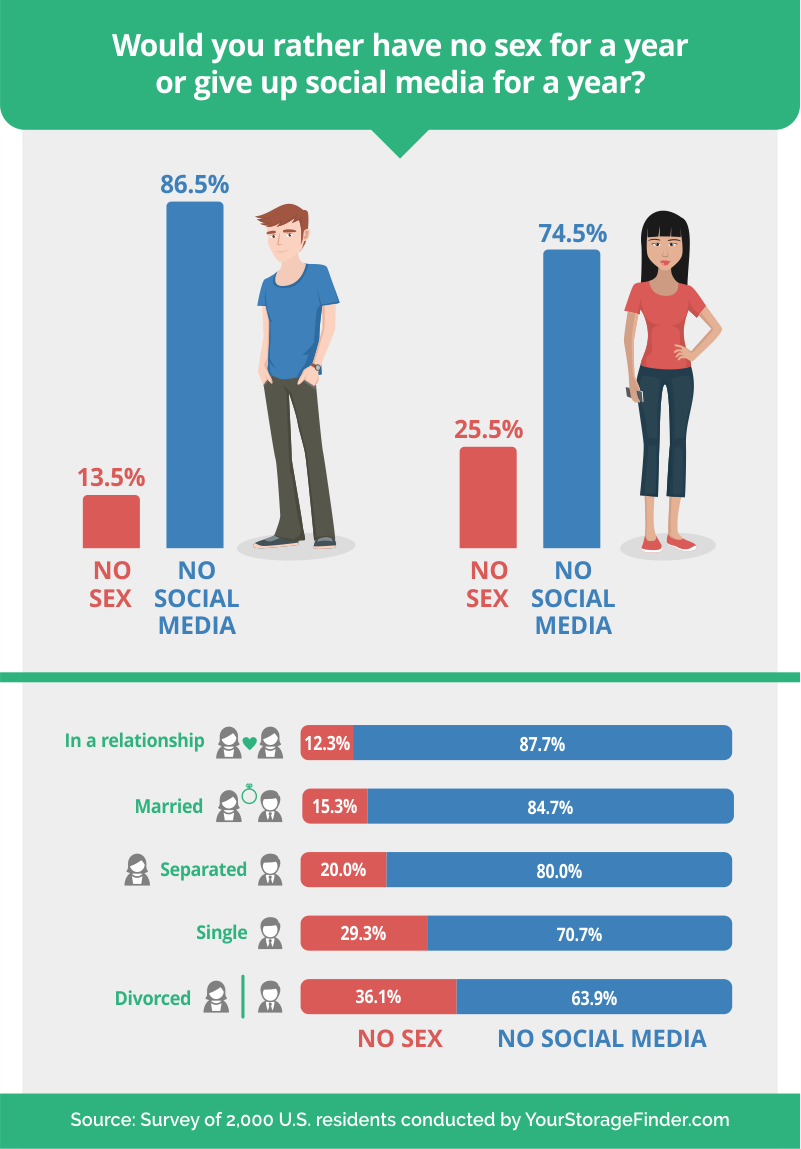 If you’ve ever worried that your partner was more interested in his or her smartphone than in you… well, there might be something to that. Recent studies have found that Americans are having less sex than they did a generation ago, and one possible cause is increased access to entertainment and social media.

We analyzed the results by relationship status and found that married people (84.7%) and those in relationships (87.7%) were most likely to put sex ahead of social media. But 1 in 3 divorced people (36.1%) were willing to forego physical intimacy to keep scrolling, posting, liking, and commenting online. 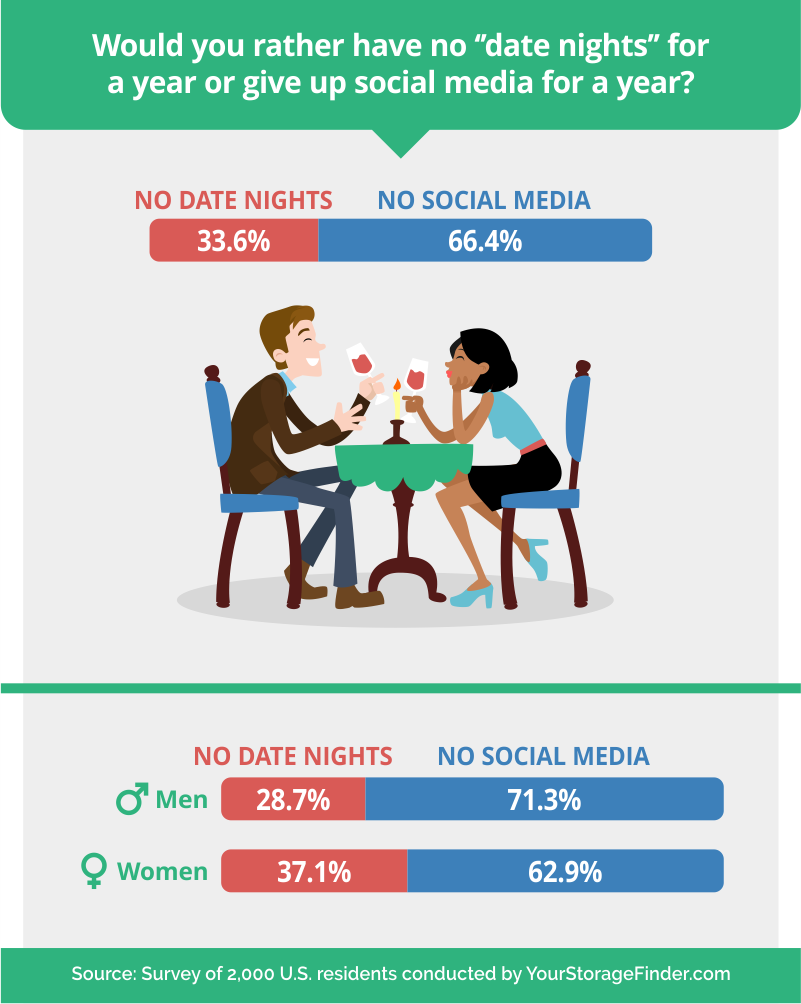 Regular “date nights” can help couples stay connected and committed when days might otherwise blur together in an endless cycle of routine tasks. Our survey found that going out on dates is important to Americans. Two-thirds of our respondents (66.4%) would rather give up social media for a year than go 12 months without date nights.

But somewhat surprisingly, our survey found that women are less committed to romantic outings than men. Only 28.7% of men would sacrifice date nights for social media, but 37.1% of women were willing to give up evenings out to keep their social media networks active. 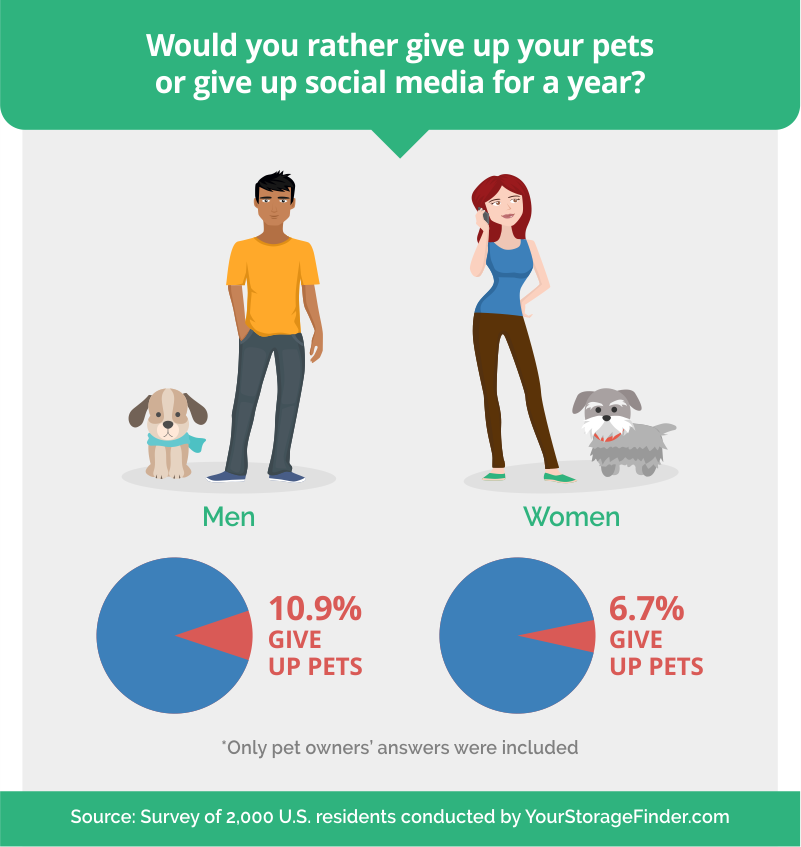 Animals give us unconditional love, but are Americans willing to return the favor? Among our survey participants, 1,359 told us they have pets. We asked these pet owners what they’d do if they had to choose between their animals or their social networks. How do cat videos compare with actual cats whose litter boxes need to be scooped? Are the #dogsofinstagram more appealing than real dogs that need to be walked and fed?

Sorry Fido, but 8.1% of our pet-owning respondents said they would rather give up their furry pals than their social media accounts. That’s a small minority, but there were interesting differences between men and women. Dogs might not be “man’s best friend” after all – 10.3% of men said they’d bid their four-legged friends farewell. Only 6.7% of women chose social media over their pets. 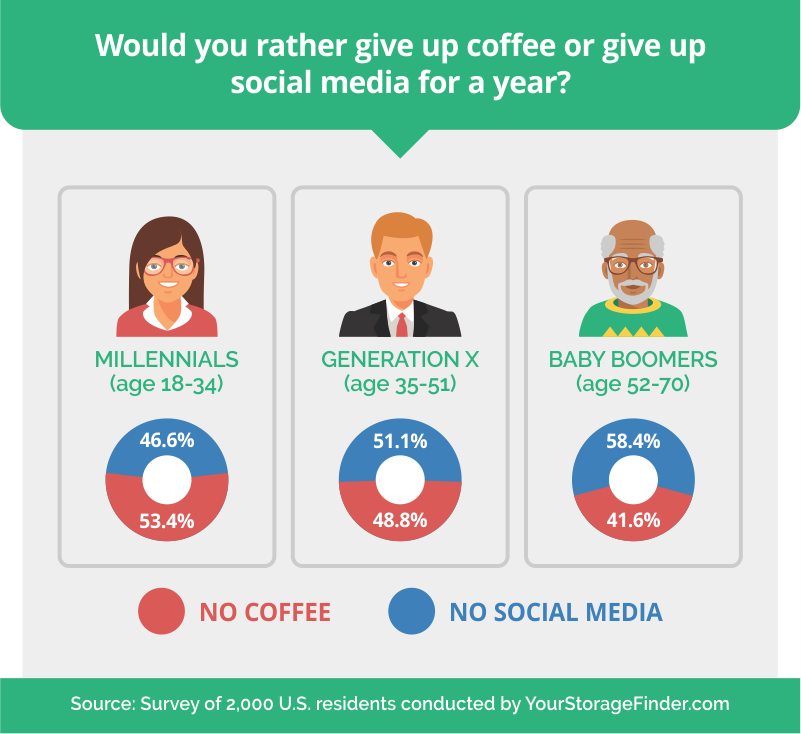 Americans love coffee, with 62 percent of us drinking it every morning. Coffee drinkers in the U.S. consume an average of 3.2 cups per day and spend more than $74.2 billion a year on it.

Despite their love of java, most of our respondents value their social news feeds even more. Overall, 51% said they’d give up coffee to keep their social media accounts active. But that sentiment differed across generations. 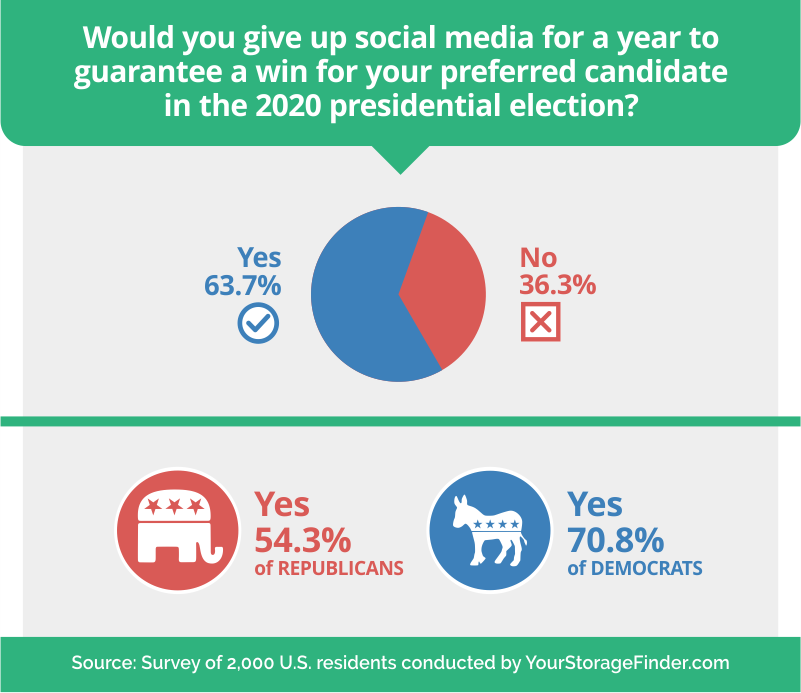 Political discord and anxiety is not confined to Capitol Hill. A recent study by the American Psychological Association found that nearly two-thirds of Americans (63%) say the future of the nation is a significant source of stress – even more than perennial challenges like money (62%) and work (61%).

As we’ve seen, most Americans would go to great lengths to keep their social media accounts active. But almost 2 out of 3 (63.7%) said they’d be willing to log off for a year to guarantee a win for their preferred candidate in the 2020 election.

The prospect of political certainty appeals to members of both major political parties but – perhaps because they are currently out of power – more Democrats (70.8%) than Republicans (54.3%) said they would give up social media to influence the outcome of the next presidential election. 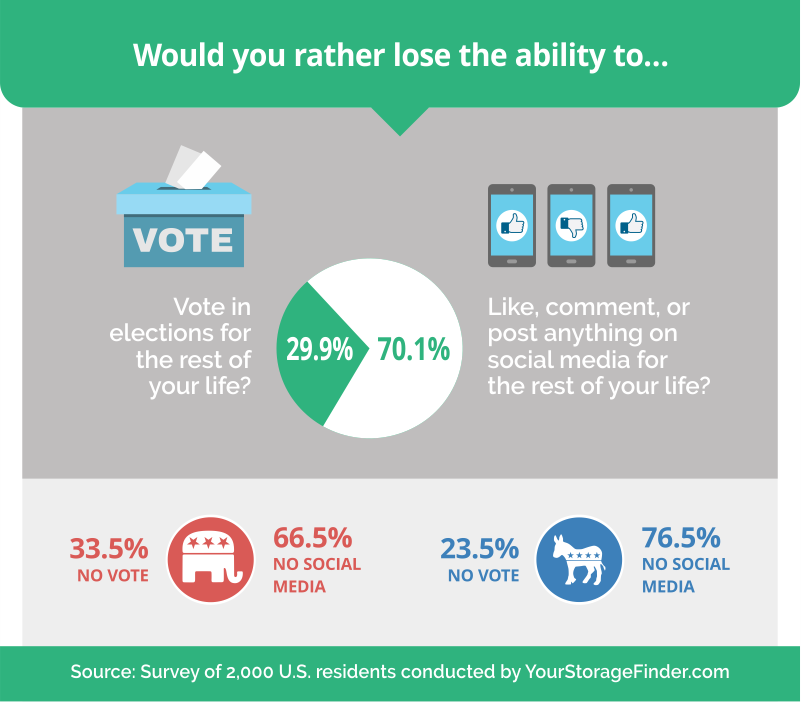 Americans aren’t great at going to the polls on Election Day. Only 55.7% of eligible U.S. voters cast ballots in the 2016 presidential election – well below typical voter turnout in other developed countries. But whether they actually exercise it or not, Americans value the right to vote. A recent study found that 63% of Millennials believe they can make a difference by participating in politics.

The sentiment was shared by members of both major political parties, but Democrats felt slightly more strongly about preserving their voting rights (76.5%) than Republicans (66.5%).

Speed in Real Life vs. Online 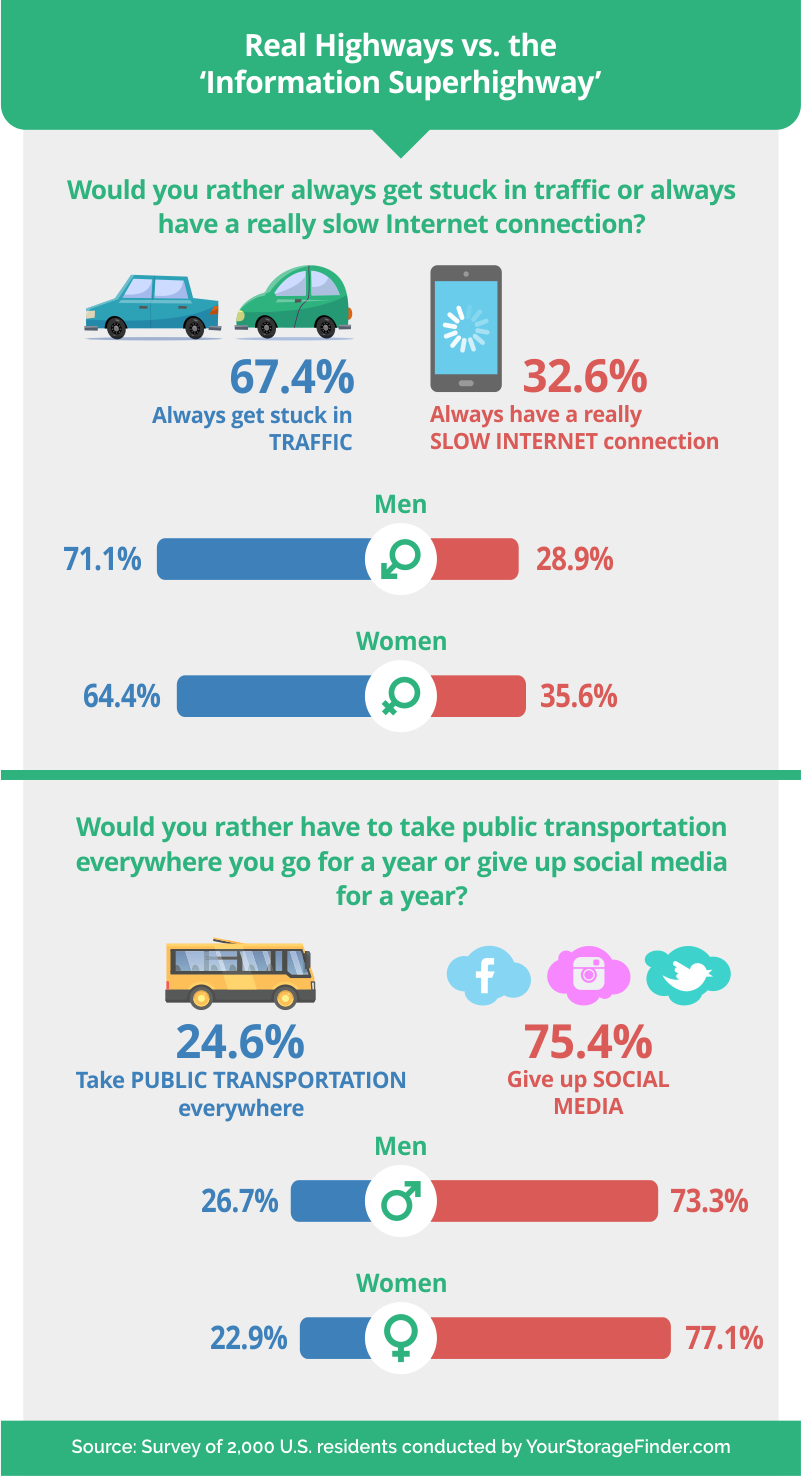 Few things are more frustrating than being stuck in traffic – trapped in a sea of unmoving cars when there’s somewhere you need to be. Unless, of course, it’s being stuck with a slow Internet connection – watching an icon spin round and round as you wait helplessly for something to load.

Which is worse? Well, according to a neuroscientist with the National Institutes of Health, both can trigger the “rage circuits” in our brains. But for two-thirds of our survey respondents, the answer was clear. Most of us spend more time online than in our cars, so it makes sense that 67.4% of Americans would rather always get stuck in traffic than always have a slow Internet connection.

The results might reveal more about the importance of Internet speed than any waning of America’s love affair with cars. According to the U.S. Census, only 5.2% of U.S. workers use public transportation to get to their jobs. When asked if they’d rather give up social media for a year or have to take public transportation everywhere they go for 12 months, our survey respondents were very outspoken. More than three-quarters (75.4%) would sooner log off social media than have to rely on buses, subways, and other modes of public transit. 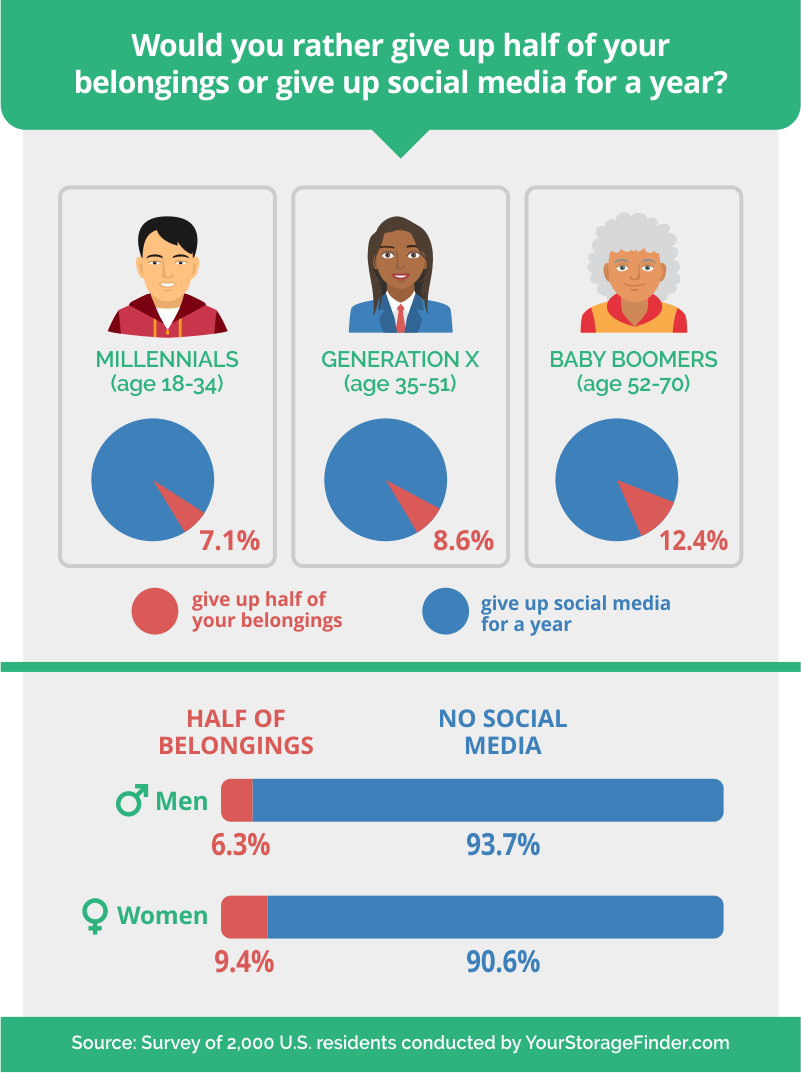 Don’t be fooled by the minimalist movement that has people across the country yearning to ditch their clutter and wondering if they could hack living in a tiny home. We are fascinated by simple living, but we still love our stuff. The average American home contains more than 300,000 items and has nearly twice as much square footage per person today as 40 years ago.

Our survey explored how people’s physical belongings compare with their online footprints. We found that physical belongings are more important than digital interaction for the overwhelming majority of Americans. Only 1 in 12 people said they’d sooner give up half of their belongings (8%) than forego social media for a year.

Older Americans were most willing to purge half of their stuff to stay connected to friends online; 12.4% of Baby Boomers said they’d do it, but only 8.6% of Generation Xers and 7.1% of Millennials felt the same way. Women are often stereotyped as being obsessed with shopping and accumulating “stuff,” but they were 1.5 times more likely to ditch half of their possessions than men. When asked if they’d give up half of their belongings to stay on social media, 9.4% of women said they would vs. only 6.3% of men. It is unclear if it’s because women care more about social media or less about physical things.

Storage in Real Life or the Cloud? 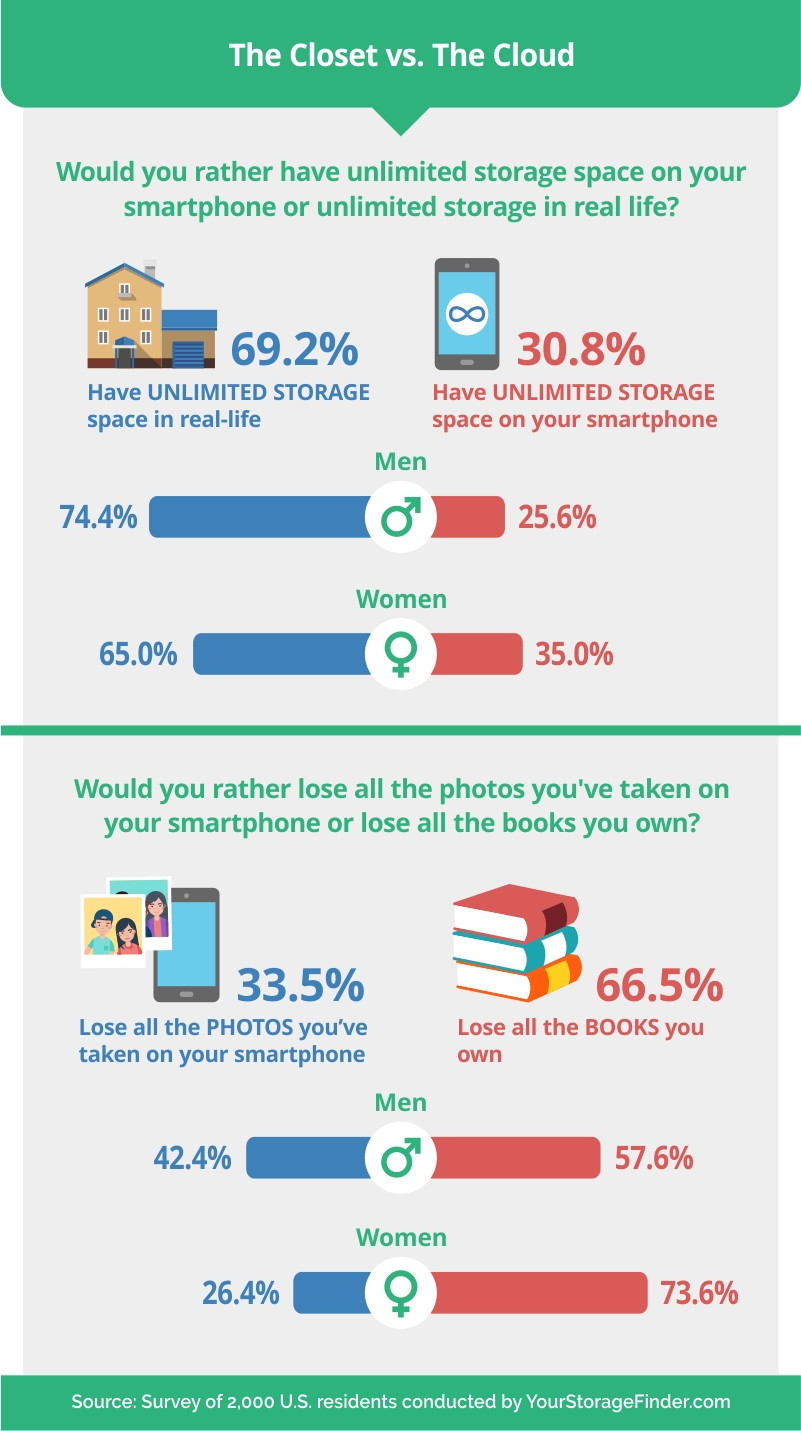 For many of us, our belongings represent a piece of our identity. They are intimately connected to our memories, our feeling of security, and our relationships with loved ones. There was a time when nearly all possessions were tangible – photos in albums, books on shelves, trophies or letter jackets in closets.

Today, the concept of ownership is changing slightly. Many photos are never printed and exist only as pixels on a computer, smartphone, or remote server. People can own extensive libraries of books, songs, and movies that are stored in the cloud and occupy no physical space. Businesses and individuals are replacing file cabinets with cloud-based storage. Professional organizers often recommend that their clients take digital photographs of sentimental items and then let the physical objects go. A new report projects that the global cloud storage market will grow in value from $30.7 billion in 2017 to $88.9 billion by 2022.

Although social media is increasingly important in our daily lives, most Americans still place a higher value on real-life experiences and interactions. Our relationship with “stuff” is changing as technology evolves, but having physical belongings and space to store them is still important – which tracks with our experiences at YourStorageFinder.com. Over the past 60 years, self storage has become a $22 billion industry in America. There are more than 52,500 self storage facilities in the U.S. offering roughly 2.5 billion square feet of rentable space. That works out to roughly 7.3 square feet of self storage space for every man, woman and child in the nation. If you ever need to find safe and secure storage for your belongings, we can help you get the best deal.

If you’re a journalist or blogger interested in covering this project, feel free to use any of the images or graphics found on this page. All we ask is that you kindly attribute YourStorageFinder.com and link back to this page so your readers can learn more about our study.